How to Account for Inflation in Your Retirement Income Planning

Each time we shop for groceries or fill our gas tanks, we’re confronted with inflation. Inflation is the rise in the prices of goods and services over time. It’s the reason bread no longer costs just 15 cents a loaf, and why the price paid today will only buy fewer and fewer slices of that loaf in the future.

And it’s not always the same from year to year, according to the Federal Reserve, which measures monthly inflation rates.

For example, it may seem outrageous that, according to the U.S. Energy Information Administration, average gas prices in the U.S. exceeded $3.50 per gallon over the past several years. But USinflation.org reports that 2014’s average inflation rate is under 2%, which is the Fed’s preferred standard and quite reasonable compared to 1980, when you may remember that a recession and the OPEC oil crisis pushed inflation to a record high of 14.8%, according to the National Bureau of Economic Research.

Inflation rates are calculated using the Consumer Price Index (CPI)—a measure of the average change over time in the prices paid for goods and services, calculated by the Bureau of Labor Statistics. The way the CPI has been calculated over the years has been adjusted for a variety of reasons, so you may want to think of inflation rates as a conservative ballpark rather than an exact reality.

Inflation becomes critical when calculating how much money you’ll need to live comfortably during your retirement. Normally, we don’t notice inflation much because our salaries increase along with it. But once you stop working and are living on a fixed income, it can become not just a nuisance, but also a wallet-squeezer.

How Inflation Affects Your Savings

If you purchase a CD with an interest rate of 4%, but the inflation rate is 3%, you really only end up with a 1% gain.

How Inflation Affects Your Savings

Many investors forget this and just calculate the bank’s nominal or promised rate, which means they could, depending on the inflation rate, come up short in the long run.

How to Calculate the Impact of Inflation

So how can you predict what inflation will look like in 10, 15, or 20 years, and how much you’ll need to maintain your standard of living? You can estimate what to save by plugging in a few known factors, such as your age, current income, desired retirement age and inflation rate (typically 3%), into an Inflation Impact Calculator. It can give you an approximate, yet realistic idea of the amount you may need during retirement to match the income you earn today.

There are many retirement income planning tools to offset inflation, such as annuities with an inflation adjustment—some of which may include a set inflation increase in the payout that is tied to an index like the consumer price index.

Stocks and inflation-protected bond funds that average annual returns higher than the average rate of inflation may be alternatives. Treasury Inflation Protected Securities (TIPS) offered by the government are another option. Be sure to consult a licensed financial professional before committing to any of these investments. 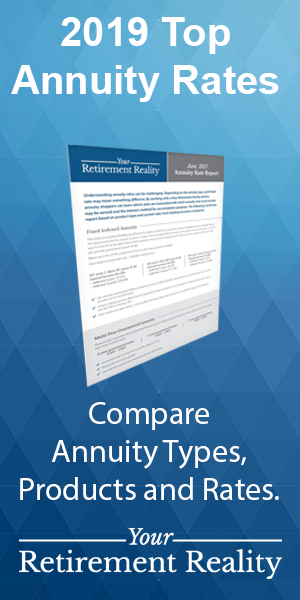